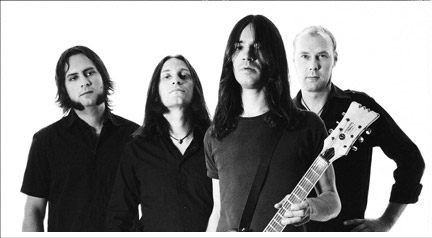 The Sewergrooves play a brand of soulful rock, that is quite unique in the contemporary musical landscape. 15 years strong, 6 records and what seems like a million 7-inches – those are the notable facts of their band-history. But there’s so much more:
As the scandinavian Rockscene decided to move into stadium-territory and rock the masses, the Sewergrooves took the opposite direction and found their refuge back in the garage. It is exactly this decision that makes their sound stand out.
Of course references such as Thin Lizzy, Stooges and the early Urge Overkill remain, but that’s not all. When it comes to the Sewergrooves, you also need to take into account the more delicate sides of Roky Erickson and the like, the morbidity of Love and the energy of MC5. For a total of 2 years the band worked on their new recordings and they prove to have been worth every second it took.
”Trouble Station” picks up right where the sound of „Saturday Night, Tonight We’re Gonna Have Some Fun“ left off.
Songs such as ”Free to fly” or ”One Of Those Things” are far more than your average retro-rock tunes. With these songs the Sewergrooves carve their successful endeavour of celebrating a present-day notion of ‘Rock’ – minus fake pathos – into stone.
And that is what’s characteristic about the Sewergrooves:
”Trouble Station” stands to prove, that even in the year of 2011, Rock’n’Roll ain’t dead!