The band was formed in 2002 when John Steen (The King), Ulrik Bostedt ( Speedo) and Tony Samuelsson (The Vicar) spent a high school exchange year in Colorado, USA. Ditching classes, drinking beer and playing rock n roll in the garage worked out pretty fine for the three young fellas. The first vinyl ep “Marvellous” was released through the small NY based label “New York Powerhitters” and the band got airtime on several college radio stations before they left USA and returned to Sweden with lousy grades, but high spirits. Two other vinyl eps (Heroine Tracks, Bedlam at the embassy)were released the following years through Swedish indie labels.

The first album, titled “Five Smell City” after their hometown Linköping (known locally as the city of five smells ) was followed by a ep with cover tracks (Unleashed) ranging from Bon Jovi, Parliament, KISS and Robyn.

Constant touring and airplay has helped the band building a very loyal fanbase in Europe. And the second album “Thunderblood Heart” took the band to a new level in 2007.

In the last three years Märvel has gone through some changes. The earlier records shows a band in superhero costumes, and the members called themselves “Vocalo, The Ambassador and Animalizer”. These alter egos have been abandoned in favor of “The King, The Vicar and Speedo”. New times sometimes need new personas.

In 2009 Märvel released a single sided one track vinyl 7″ titled “A Pyrrhic Victory”. The singel was followed by a tour that was filmed and later released as a 20 minute road movie.

In the fall of 2014, the band once again had itching clits and began writing and rehearsing new songs. In february 2015 the band teamed up with Fred Estby in his Stockholm studio to record a minialbum that was released in september 2015. The Hills Have Eyes was released as a first single the 29th of May and people haven’t stopped whistling (or playing flute) ever since. Papa Bear and Alfred Lindahl produced a video for the band’s cover of the W.A.S.P. classic “L.O.V.E. Machine” which won the Honolulu International Film Award for best music video.

This meant that Märvel needed a new home which was found one in The Sign Records. Under the name of Gaphals, the guys behind the label has put out over 100 releases and are know for their dedication and commitment which resulted in them reciving Lars Winnerbäck’s cultural award “Nyponet”.

The deal between Sign Records and Märvel was signed early 2017 as the band started working on their seventh album in the studio Solskensfabriken. The band produced and recorded the album on their own this time using their own studio. The new album is called “Märvel at the Sunshine Factory” and will be released the 6th of October 2017. Meanwhile, The Sign Records started off the co-operation by releasing “The Hills Have Eyes” on CD as well as giving it a US release. 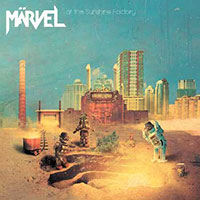