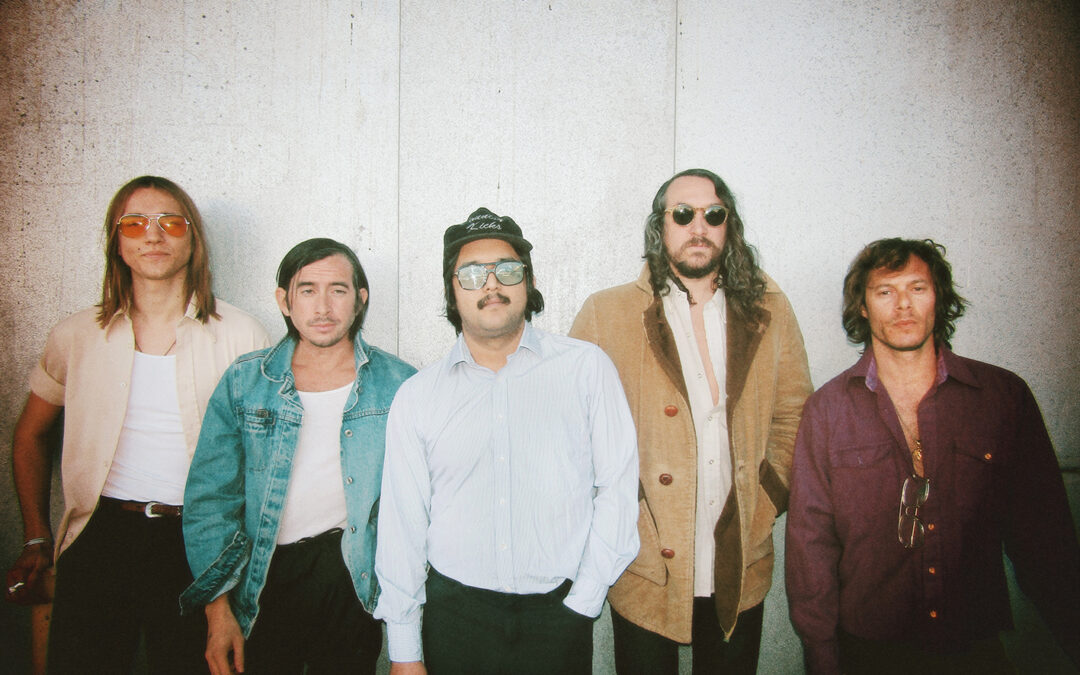 With travel and transformation propelling the band into a new psychic domain, the Mystic Braves’ traversal of the globe has allowed experience and nostalgia to take hold and set them on a path into a new era. Leaving the fuzz pedals behind, original members Julian Ducatenziler, Shane Stotsenberg and producer Kyle look toward a cleaner, shinier sound on the new record and an ethereal vision of the future.
Growing up in a musical household, Julian began exploring music at an early age. His father a trumpet player, and his mother a singer, Julian took to writing songs as a teenager. Soon enough, he began forming bands, which eventually led him to starting the Mystic Braves in 2011 with four like-minded musicians in San Diego. Quickly, the band moved to Los Angeles and minted their psychedelic-pop sound. With their hard-driving guitars and 1960s inspired melodies, the Braves’ took their music around the world. Having been all over the US, Canada, Europe, and Mexico City twice, exploring new territories has remained a continual inspiration. As Julian looks back, he remembers how “travelling through Europe and playing for really excited people out there is one the highlights of my time with the band.” This excitement is evident not only in their live shows, but deep in the grooves of their vinyl as well. As they headed into a Malibu home studio baked in the California Rock and Roll sound to record their fourth full-length record, the band drew from the frenzied elation of their time on the road. Reflecting on their past, and examining the ever-present stream of one’s existential thoughts, Julian began writing for the upcoming album. With only two songs written beforehand, the band headed into the studio. Taking a more modern approach, Julian, Shane, and producer Kyle began writing and arranging in the studio and drawing inspiration from bands like the Strokes, Parcels and Tame Impala. Without completely abandoning the psychedelic flare that so defined their previous records, the Braves replaced fuzz pedals with chorus pedals and ditched much of the tremolo used prior for delay effects that transport the songs into a 1980s celestial, and dreamy atmosphere.
The new record is a substantial shift for the Mystic Braves. As Julian reminisces on the band’s previous recordings, he explains, “In the past, I would normally have songs written out, and parts for everyone in mind. The new record is more of a collaborative approach. We really went in there and started from the ground up.” The sonic metamorphosis of the new record is sure to leave audiences with the same thrill that went into each song.

After their previous singles ‘Sundown’ ‘Never Went Away’ and ‘Lonely Heart’ now present “Hanging On”. His new single and video clip, which we present to you today, is a wonderful series of beautiful images about love and the moments that are worth living in existence, fleeting or not. As they say: ‘”is about holding on to the memories of a past relationship. The further you go, the more you get caught. Love may not last forever, but in its eternity we try to hold on to the good in life as much as we can. “.

Anyone who knows the international garage and psychedelic scene well knows how the Californians Mystic Braves hang out. And they already have everything ready to make known to the world ‘Pacific Afterglow’, their new album that we will launch on January 28. Your fans will have already observed that, with each new step, Mystic Braves increasingly refine the coordinates that will define the sound of their next album. Let’s say that the more retro melodies that characterize them will give rise, in their new work, to a more ‘psychedelic 2.0’ version of the band. Thus, the current musical direction of the band also points to groups such as Tame Impala, Babe Rainbow, Goth Babe, The Strokes, Parcels or Washed Out.