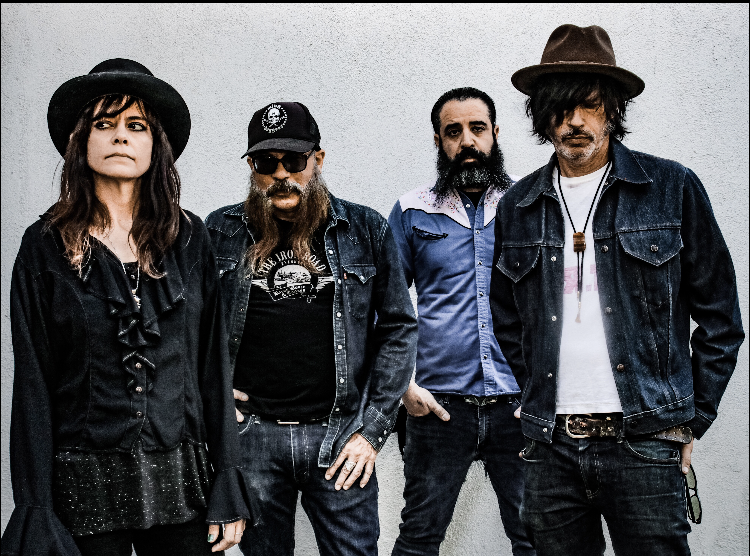 Musical trends may come and go, but the Hangmen keep moving forward heedlessly with the headlong momentum of a runaway train. The quartet’s new album on Acetate Records, East of Western (to be released in April 2012), smashes together lead singer Bryan Small’s lurid love songs with unsparing, unsentimental blasts that shine a baleful and penetrating light into the dark and seedy corners of modern- day Los Angeles.
The Hangmen have always been a unique group that can’t be easily pigeonholed, and East of Western captures all of their different sides. When they first got together in L.A. in 1987, the Hangmen were fiery and hard rocking enough to play with metal bands, but they also had a stubbornly rootsy and punk rock attitude that made them fit in just as easily with such legendary underground icons as the Gun Club and Tex & the Horseheads. Their trademark dual-guitar attack combines the classic-rock drive of the Rolling Stones and AC/DC with the hard-charging swagger of Johnny Thunders’ Heartbreakers and the sinister allure of the Cramps.
But what really makes the Hangmen stand out is Small’s gift for writing anthemic choruses with head- banging hooks, which he delivers with his distinctly feral and instantly recognizable snarl. On East of Western, he sneers his way through boldly hard-rocking romantic pleas (“I’m Your Man”), Western-tinged barn-burners (“Railroad Man”) and insomniac tales of junkie self-destruction and ultimate redemption (“Drink Smoke”). With its big, fat and leering monster riff, “Big Red Rooster” is a fitting homage to the late Lux Interior of the Cramps, who Small lovingly describes as a “teenage bastard of the chosen one.” Drummer Dino Guerrero (who has played in Jack Grisham’s Tender Fury, as well as the supergroup Charley Horse with members of Nashville Pussy and Throw Rag) and longtime Hangmen bassist Angelique “Eek” Congleton (who also fronts the band Swamplands) give “Big Red Rooster” a properly menacing and scarily seductive groove.
Despite its title, “Homesick Blues” is more of a flat-out punk rocker than a typical blues song, as new Hangmen lead guitarist Ron Heathman (ex-Supersuckers) twists up a Godfathers-style lick. “This is the town of the cold blooded/Long gone, memories faded/Dug up and desecrated,” Small declares on the garage-rocking nugget “Graverobbers,” as guest star Jordan Shapiro conjures wispy trails of pedal-steel adornment. “‘Graverobbers’ is about the media in Hollywood and how everything is for sale and nothing is off limits, dead or alive,” says Small.
“Had a Girl” proves the old adage that the best and most memorable ballads are sung by punk rockers and those who don’t usually sing ballads. “I had a dream, and it was overrated,” Small croons in a world- weary voice. “I had a heart, but it was confiscated.” Acoustic and electric guitars jangle softly together as Bryan rhapsodizes about a mysterious girl who “changes like the weather.”
Over the years, the Hangmen have worked with several notable producers, including Vic Maile (Motorhead, The Inmates, Hawkind), who recorded the Hangmen’s self-titled Capitol Records full-length LP in 1989, which is now a prized collector’s item. (Good luck finding that one on eBay!) Radio Birdman singer Rob Younger helmed the group’s lost second album, which was commissioned by Geffen Records but never released and is now an even greater rarity.